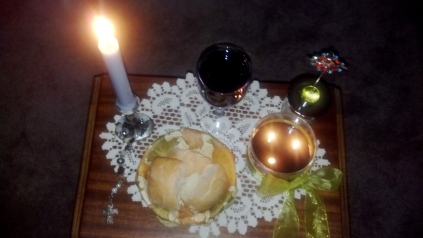 It’s unusual you would hear from me two days in a row, but I need to tell you honestly, I can’t help myself. While I spent yesterday fasting and focusing on Christ, today I can’t get you off my mind. Yes, you — His scattered flock.

At first I thought these feelings had more to do with extending the intensity of yesterday’s thoughts. If you read my post last night, Wrecked for Good by the One Who Traded His Life for Mine, you can garner a glimpse of the heaviness of my heart.

To ease into rest and to give my Lord a proper thank You, I carefully arranged a sacred space in which to share communion with Him, ending a period of fasting. I longed for connection. My special table setting included not only the traditional holy sacraments, but other pieces of significance, some given me by my spiritual family — a Celtic cross, a silver candlestick, an acacia bowl for the broken bread, a small decorative piece made of stained glass and one of my sister’s candles, all nestled on one of Mom’s doilies atop a phone stand that belonged to my grandmother. I even draped a delicate and flowing length of green ribbon that once wrapped a meaningful gift sent from a California friend.

I listened to a couple of songs, prayed for a good while and cozied up in the quiet with the Lover of My Soul.

Then Midnight came, and my thoughts started to turn. I found myself praying, “Let me not be among the followers who fled while You lie buried in the ground.”

As I cleaned up from our evening together, I couldn’t push from my mind His scattered flock on the night of suffering. Of course they fled. Questions formed. Would they have thought their own deaths next? Lurking in shadows, fixed not on Christ, but on the cross, would they act out the very denial Peter spoke? What would I do if Jesus were dead? Would I deny the life He once gave? The calling of the Kingdom here on earth? Would I lie in bed, covers over my head, shaking for fear of being found?

So, yeah. I woke up sad. So sad, that I decided I wouldn’t be very good company for myself if I went for a walk at the park, at least not until I sat down to follow the thread of sadness. It’s crazy, these tears spilling on such a glorious spring afternoon. But it’s where I am. Suspended? Perhaps. But I’m hopeful in the suspension, because it led me here, to you. I can’t get past the gate of feeling there’s something I’m to tell you. That I’m to call you (us) out from the shadows to gather back at the river, somehow. It leaves a lump in my throat to even say these things “out loud.”

The thread of tears continues.

On this, the day between the suffering and the celebrating, Jesus’ followers wouldn’t have known the stone couldn’t hold Him in the grave. He had given them glimpses of Truth, but their hearts echoed only grief. Fear capsized their hope, sucked life from their lungs, and sent them running for cover. Luke tells us they “stood at a distance, watching.”

I’m not so unlike those scattered, beat up believers, watching from a distance, hiding among the shadows as if I were lost and without  a Shepherd. I’m guessing, neither are you, since God brought me here and asked me to gather you. I don’t know all that I’m to say once we’re together. But I do know I’m willing to step out of the shadows to be found—for you, with you.

Unlike the followers who surely must have scattered on that night of Suffering, I have seen what waits on the other side of the stone. Have you? Then we have some talkin’ to do.

Then the angel said to the women, “Do not be afraid, for I know that you are looking for Jesus, who was crucified. He is not here; he has risen, just as he said. Come and see the place where he lay. Then go quickly and tell his disciples: ‘He has risen from the dead and is going ahead of you into Galilee. There you will see him.’ Now I have told you.”

So the women hurried away from the tomb, afraid yet filled with joy, and ran to tell his disciples. (Matthew 28:5-8)

There, I followed the thread. Sadness dispelled, it’s time for that walk. Join me?

Every two minutes, evil strips innocence from a child and sells her into slavery for sex. Not in a third world country, but in America.

Before you take another breath, the next victim will be tricked and taken from her family by a profit-hungry criminal. She could be a friend. Your sister. Your daughter.

In her new book, Rescuing Hope, Susan Norris dares to dive into the grit of child sex trafficking taking place across our nation. Her story of Hope, an innocent 14-year-old, weaves together all the stories of all the girls and all the families, the pimps and the police officers she interviewed.

It is real life fiction for young adults. It's gritty. It's necessary. Read it to educate yourself. Read it with the girls in your life. Walk with them through the tough issues it raises. Let it be a catalyst for conversation between you and among your peers.

Purchase RESCUING HOPE to help raise awareness of trafficking in the U.S.

I'm honored to have represented Susan and to have walked alongside her in the development, publication and distribution of this important work. Together, we can raise our voices for Hope across America!